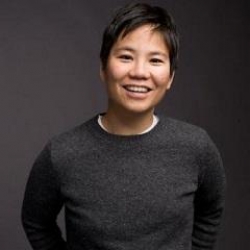 Amy Sueyoshi is Interim Dean of the College of Ethnic Studies at San Francisco State University. Her research lies at the intersection of Asian American studies and sexuality studies. She is the author of Queer Compulsions: Race, Nation, and Sexuality in the Intimate Life of Yone Noguchi and Discriminating Sex: White Leisure and the Making of the American “Oriental” just out with University of Illinois Press. Her essay on API queer history titled “Breathing Fire” appeared in the National Parks Foundation’s historic LGBTQ theme study in 2016. She is a founding co-curator of the GLBT History Museum, the first queer history museum in the United States, and the recipient of the Willie Walker Award for service to the GLBT Historical Society. She also seeded the Dragon Fruit Project, a community oral history project for API Equality Northern California, a queer Asian Pacific Islander advocacy group in San Francisco Chinatown. Last year, Amy was a Community Grand Marshal at San Francisco Pride and was honored with the Clio award for her contribution to queer history.